LouiSimone Guirandou Gallery, ABIDJAN, AT THE DAKAR BIENNALE WITH PEDRO PIRES AND ANGE-ARTHUR KOUA, FROM MAY 19 TO JUNE 21, 2022 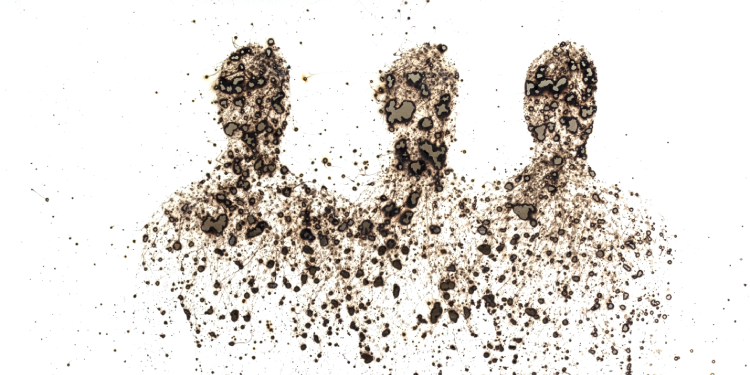 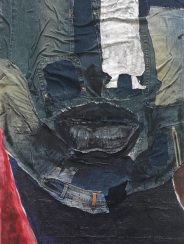 Main Image:
Detail from Pedro Pires' Anti-Fragility, start-middle-end 2021 114x122cm, ©Gaël Gellé, courtesy LouiSimone Guirandou Gallery
Small Image:
Detail of Ange-Arthur Koua's Between the Waters #1 - 225 x 70 cm - 2022
In the context of the OFF section of the Dakar Biennale 2022, LouiSimone Guirandou Gallery is pleased to present from May 19 to June 21 the exhibition "Remous", a meeting of works by artists Pedro Pires and Ange-Arthur Koua, which are intertwined in the heart of Keur Louise and resonate with this place steeped in history that is the island of Gorée.
Pedro Pires and Ange-Arthur Koua place the question of identity and migration at the center of their artistic approach. The displacement of populations, whether voluntary or imposed, leads to changes in identity that are passed on from generation to generation.
The sea voyage, the very symbol of adventure, but also of the danger and hardship of the journey to the unknown, transforms individuals into anonymous flows, to which Pedro Pires' sculptures and Ange-Arthur Koua's paintings attempt to pay homage.
Pedro Pires expresses himself through sculpture, drawing, photography, video and installations.
Born in Luanda in 1978, the artist lives and works between Luanda (Angola) and Lisbon (Portugal). For more than ten years he has been exploring the sense of dislocated national identity, migration and human rights. He is particularly interested in questions of identity and stereotypes in direct relation to education, history and institutions. A particular interest that comes from his dual African and European cultural background.
His sculptures and installations have a strong relationship with the human body and anthropomorphic volumes. The artist plays with the concepts of destruction and reconstruction and does not hesitate to recover objects belonging to the daily life of the cities where he exhibits to highlight the way in which identity is shaped, negotiated and remade.
As for Ange-Arthur Koua, he draws, paints, dirties, burns, glues, sews, and associates materials. A mixed media aesthetic emerges where painting and textiles are combined in an assembly process that aims to translate the dislocation of identity.
The Ivorian artist, originally from Abidjan, questions the power of beliefs and heritage on the construction of identity. His paintings present two sides, which, as back to back and irreconcilable, stage the duality of the individual: on the one hand his appearance, shaped by the heritage of the elders and beliefs, and on the other hand his deep essence, which belongs to him but he struggles to express. These paintings seem to dance around the great garment of the Asenmblan Gan Gan, this giant that custom makes exist. Ange-Arthur Koua imagines this garment to be composed of the souls of those he protects, just as these pieces of cloth are impregnated, according to Akan belief, with the souls of those who have worn them.
The recovery of everyday objects, from the pieces of jeans of Ange-Arthur Koua to the metallic elements of Pedro Pires, allows them to anchor their works in reality and to give body to these anonymous silhouettes. Each in his own way highlights these drifting identities, which struggle to find themselves in a single model of society.
https://www.louisimoneguirandou.gallery/ 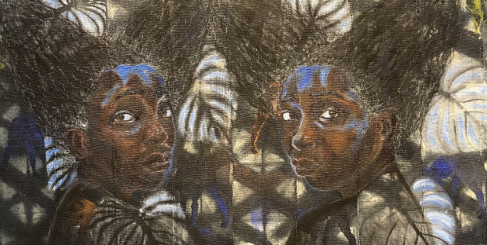 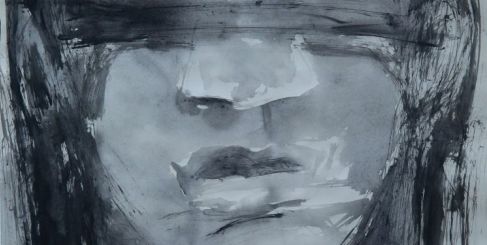 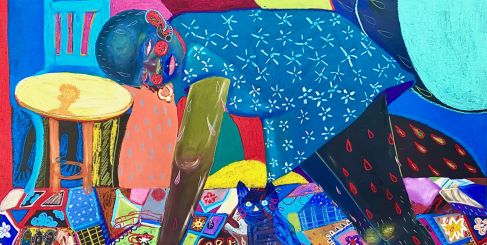 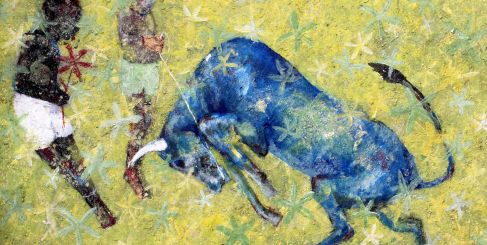 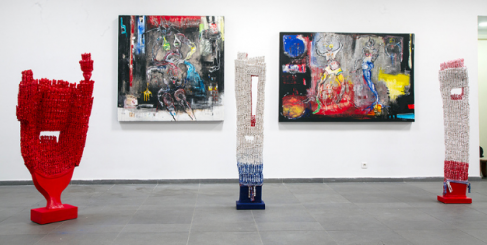 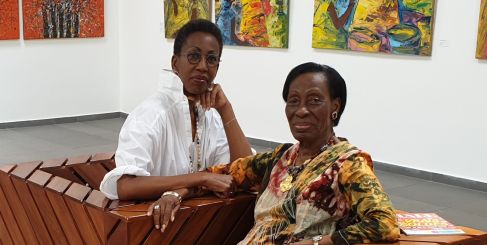