INAUGURATION OF THE SPECIAL EXHIBITION AT THE PRESIDENCY OF THE REPUBLIC OF BENIN, IN COTONOU ON FEB 20, 2022 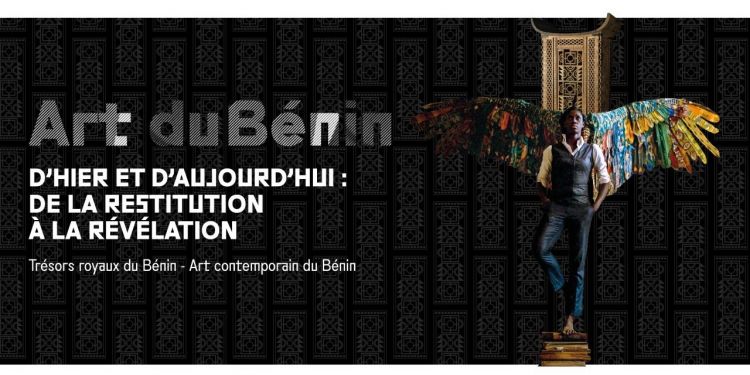 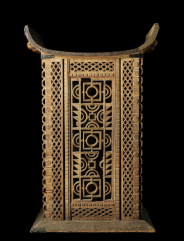 Main Image :
Julien Sinzogan, The reverence, 66 x 96cm, 2019
© Charles Placide
Image above:
King Ghézo's ceremonial throne, Kingdom of Danhomè, 19th century. Wood, metal
Dodds collections returned
© Patrick Gries
The Office of the President of the Republic of Benin announces the inauguration of a one-off exhibition - event, which will take place between the 20th of February the 22nd of May, 2022 in Cotonou.
The event is intended to fulfil two separate purposes: It will simultaneously shine a spotlight on the classical art of
Benin, the twenty-six royal treasures recently restored by the Quai Branly Museum, and on the contemporary artistic scene of Benin and its diaspora, including both wellßestablishedd and emerging artists, all in a 2,000m2 exhibition space.
Using a diachronic approach ranging  the 19th century to the 21st century, and including masterpieces by both
historic and contemporary artists, the "Art of Benin in the Past and Today, from Restitution to Revelation” exhibition will make the country’s historic and contemporary heritage accessible to both national and international audiences in Benin; the nerve centre of artistic creation and dissemination in the continent of Africa.
The "Contemporary Art of Benin" section includes over 100 works by 34 contemporary artists and will showcase mediums, aesthetics and techniques: paintings, sculptures, installations, video art, drawings, digital art, performance art… The Royal Treasures of Benin section will majestically present a collection of works that have just been returned to their place of creation after 129 years of exile.
Hosted at the Palais de la Marina, home to the Office of the President of the Republic of Benin, the "The Art of Benin in the Past and Today: from Restitution to Revelation", will be a highlight during the first quarter of 2022 and will include a number of multi-disciplinary meetings both "inside" and "outside the walls": conferences, screenings and educational initiatives.
This exhibition-event forms part of the dynamic initiated by Benin - both for the reinstatement of its patrimony and the expansion of its contemporary artistic scene - to endow the country with a number of museums of international reach: the Musée de l'Épopée des Amazones et des Rois du Danxomè (MEARD) and the Musée d’Art Contemporain de Cotonou (MACC).
These large cultural facilities are fully up to date with international standards are highly anticipated, they are scheduled to be inaugurated by 2024.